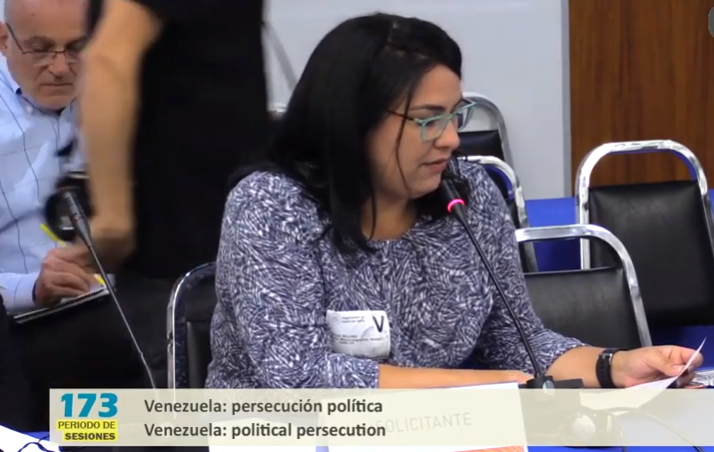 This is the translated text of the speech given by Beatriz Borges, Executive Director of the Venezuelan human rights organization Cepaz, at the hearings before the Inter-American Commission on Human Rights (IACHR) on Political Persecution in Venezuela.

Good morning, commissioners, my name is Beatriz Borges, Executive Director of Cepaz and, along with my companions Laura Louza, Director of Acceso a la Justicia (Access to Justice), and Génesis Dávila, Director of Defiende Venezuela (Defend Venezuela), we wish to inform you about the aggravated situation of political persecution in Venezuela. My considerations take into account the insight of other organizations in Venezuela, particularly those that form part of the Social Dialogue initiative, such as Civilis Derechos Humanos and Provea.

First, we must emphasize that the policy of persecution against people who dissent against the government, in full exercise of their rights, is not new. The policy of persecution has been documented and shared with the IACHR since 2013 and is documented by this Commission in its reports, along with the reports by the Office of the High Commissioner. Since 2015, we have sent information on at least 12 documented patterns of State persecution policy operating in Venezuela. The prolongation of this policy over time has brought serious negative consequences to the exercise political rights of Venezuelans.

It is imperative to remember that the complex humanitarian emergency in Venezuela has its origin in the decomposition of political power and the dismantling of institutions, which has signified serious violations of the political rights of the Venezuelan population, including the right to participate in free and democratic elections.

Gradually the government created a parallel State, eroding the legitimate one, to use power in an abusive and arbitrary way from within this other State. This has been done through bodies such as “Protectorates” that impose their authority in states of the country where opposition governors were elected; a “National Constituent Assembly” which was fraudulently summoned and elected, and is used to circumvent the Legislative Power so the government can enact laws and issues decrees without the National Assembly; the Judicial Power has ordered the violation of the immunity of National Assembly legislators; and the Executive Branch is being exercised without having held legitimate presidential elections that are founded upon the sovereignty of the people. These practices did not begin with the mandate of Nicolás Maduro. It is a policy that was applied for a long time during the government of Hugo Chávez.

The policy of persecution has the purpose of preventing democratic alternation in political power by using State coercion and applying social control, which is possible due to the absence of independent institutions and the prevailing impunity. We have denounced this in two reports presented to this commission – which explained the causes of the breakdown of democratic institutions in Venezuela and  the role played by the National Constituent Assembly in abuses of State power.

Now, we must alert on two specific points:

First, in recent months, the government’s policy on persecution against the National Assembly has worsened. This is not fortuitous; the National Assembly is the last vestige of democratic institutions in the country. Today, all opposition legislators have been victims of some type of violation of their rights and more than half cannot fully exercise their duties.

Second, the persecution has progressively escalated. This has meant more attacks against various sectors of Venezuelan society to quell protests, of a more organized and violent nature, and with greater focus on historically poor communities.

As we have noted in our reports, the persecution against dissidents has gone well beyond the patterns of intimidation and the use of some legal procedures. Today, there is systematic  persecution through the practices of arbitrary detentions and enforced disappearances, of which journalists, human rights defenders, guild, union and student leaders have been subjected to. Likewise, torture and death in custody have become an increasingly common occurrence, these practices were present in the cases of Councilman Fernando Albán and Navy Captain Acosta Arévalo. The attacks have been more massive in popular neighborhoods in several states of the country at the hands of the Special Armed Forces (FAES) and other recently created special security forces. It should be noted that, since 2016, almost 18,000 people died at the hands of the security forces in Venezuela in situations of alleged “resistance to authority.” The Office of the High Commissioner indicates that many of these violent deaths can constitute extrajudicial executions.

This, Commissioners, has continued to occur in plain view, despite the active observation of the IACHR, the United Nations and an international community concerned about the human suffering of millions of Venezuelans undergoing the worst economic, social and humanitarian crisis ever experienced by a country in peacetime.

International human rights protection systems, both at the Inter-American and universal levels, are faced with an alarming situation and a historic mandate to activate all mechanisms created to respond in a timely manner to the protection of the human rights of all Venezuelans with greater haste and firmness, in a context in which the government that violates them no longer has legitimacy and has while maintain firmer control of the State and using this political power to its advantage. With this hearing, we want to reiterate that any solution to the severe Venezuelan crisis involves the restitution of political rights in the broadest sense. In particular, guaranteeing the right to participate in free and fair elections, for which we require the FULL restitution of political rights. This is the fastest way to restore democracy and the rule of law in our country.