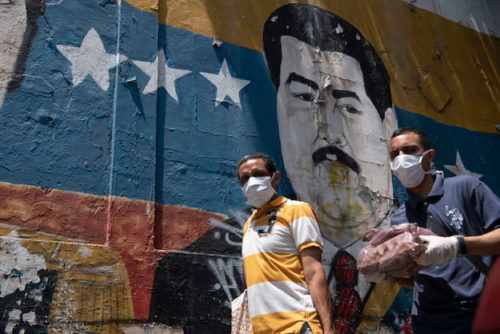 The spread of the coronavirus in Venezuela – where health experts are now bracing for exponential growth in the country’s caseload – has had a dangerous side effect: an escalation in government repression.

At the Center for Justice and Peace (CEPAZ), a Venezuela-based human rights NGO, we have documented an increase in patterns of harassment beginning in March, with tactics ranging from raids on private property and arbitrary detention to media smear campaigns and acquiescence to acts of violence against opposition political leaders. All are designed to spread fear and help President Nicolás Maduro achieve his ultimate goal of remaining in power.

Prior to the pandemic, CEPAZ had already identified a government policy of persecution toward elected members of the National Assembly, and legislators remain frequent victims of the government’s efforts to stifle dissent. But as the pandemic spreads, the Maduro regime has increased its focus on other targets – from healthcare workers to migrants making their reluctant return to the country.

The cases we have recorded show how the pandemic has been used as a mechanism for social, political and economic control during quarantine. Persecution of human rights defenders and journalists has also increased. Frequently, the government’s targets have denounced abysmal conditions in hospitals fighting against COVID-19, shortages of personal protective equipment, and a lack of transparency in the data that the government releases about the spread of the disease.

Our report shows at least 184 cases of systematic human rights violations between March 16 and June 9 that fit with the government’s pattern of political persecution. Of these, 92 involve journalists and communications professionals, 56 political leaders, 25 healthcare professionals, and 11 human rights defenders.

The state of emergency declared by the regime has provided the government more opportunities to carry out arbitrary actions against its detractors, including through a surge in censorship. Those who have reported on WhatsApp or social networks about the realities of COVID-19 have often been persecuted and arrested. The government has made examples of anyone who breaks quarantine for any reason, with police forcing some to perform physical exercises in public as a form of punishment.

On April 2, Diosdado Cabello, a member of the National Assembly and one of Maduro’s most important allies, took to public television to announce the so-called Furia Bolivariana campaign, which the government says is an effort to defend Chavismo from its opponents. As a result, Venezuelans with links to the opposition had their homes defaced with threats and insults. We have documented 45 such cases, in addition to 40 cases of censorship, 36 cases of harassment and threats through the media and armed militias, and eight home searches without a court order.

Venezuelans returning home, especially from other countries in Latin America, also face state discrimination due to COVID-19. According to the director of Migración Colombia, Juan Francisco Espinosa, in the first three months of quarantine 67,780 Venezuelans returned home via the Colombian border. Once on Venezuelan soil, returnees are often victims of threats, stigmatization and systematic human rights violations. They are isolated in overcrowded conditions, sleep on the streets and have limited access to food and water. Many report being humiliated or physically attacked when they complain about their treatment. Returning migrants have been called “biological weapons” by Lisandro Cabello, secretary of the Zulia state government, alluding to an alleged strategy from the Colombian government to infect Venezuela with the virus. Official government social media accounts attempt to criminalize these migrants, and encourage Venezuelans to report anyone entering the country through unauthorized roads to the authorities.

Despite the pandemic and increased levels of state repression, Venezuelans continue to protest. The Venezuelan Conflict Observatory recorded at least 580 protests in March, rising to 716 in April and 1,075 in May. Many of these protests, however, are broken up via the use of unrestrained force, including the deployment of armed militia groups.

The regime is also exploiting the vulnerability of Venezuelans in need. According to the United Nations, 9.3 million people, approximately one-third of the population, are moderately to seriously food insecure. The Maduro government has manipulated food shortages for political gain with programs that make the most vulnerable groups dependent on state assistance.

According to a survey from Consultores 21, between 72% and 74% of the population has a state ID card, known as the “fatherland card.” This means that Venezuelans, even those who have no intention of supporting the regime, are obligated to join this program in order to receive sorely needed social benefits. Poverty, fuel shortages and cuts in public services have left Venezuelans vulnerable and dependent on the state. These are the perfect conditions in which to exert control.

This humanitarian emergency has acutely affected women and girls, who are also victims of pandemic-related persecution. CEPAZ has documented at least 14 cases of women being jailed without a warrant, among them political leaders, human rights defenders, journalists and doctors. At least a further 17 women have been harassed by the regime via the media and armed militia groups. The persecution of returned Venezuelans affects women in particular, who encounter greater challenges during border crossings including the threat of sexual violence.

Government repression is not new in Venezuela, but it has worsened during the pandemic. The effect is clear: The crackdown has silenced the voices of those demanding their rights and speaking up about the virus. It is no coincidence that among the most targeted are human rights defenders, healthcare workers and journalists. The Maduro regime’s goal is also clear: remain in power and create an atmosphere of opacity to survive the pandemic.

Borges is the director of the Center for Justice and Peace (CEPAZ), a human rights organization in Venezuela. Follow her on Twitter @beabor and CEPAZ @_CEPAZ.