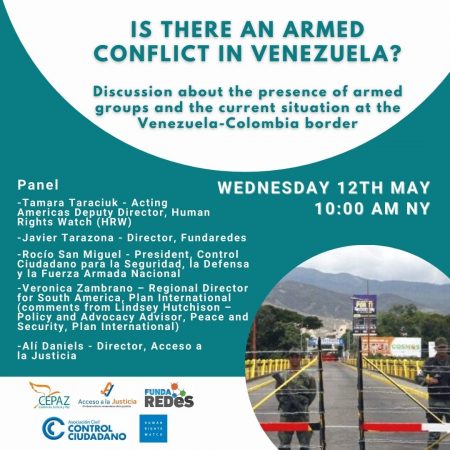 Is there an armed conflict in Venezuela?

Is there an armed conflict in Venezuela?

The absence of a traditional armed conflict in Venezuela has been understood as one of the main reasons why the situation is not considered as relevant to the international community compared to other crises around the world with similar numbers of victims and dynamics. This is due to the difficulty in conceptualizing the role that the international community can have, especially through the action of the Security Council, when atrocities occur at the hands of a government within state borders without a nexus to an armed conflict.

According to the Venezuelan organization Fundaredes, the different armed groups operating in the country include 9 fronts of the Revolutionary Armed Forces of Colombia (FARC), 10 fronts of the National Liberation Army (ELN), the Bolivarian Forces of Liberation (FBL), the Popular Liberation Army (EPL), the Rastrojos, the Urabeños, the Aguilas Negras and the United Self-Defences of Colombia (AUCV). They operate in at least 19 of the 24 states across the country including Tachira, Apure, Zulia, Merida, Trujillo, Barinas, Lara, Falcon, Carabobo, Portuguesa, Aragua, Guarico, Bolivar, Monagas, Anzoategui, Delta Amacuro, Caracas, Yaracuy and Amazonas.

In 2019, Human Rights Watch denounced that in the Venezuelan state of Apure, non-state armed groups use violence to control peoples’ daily lives, imposing their own rules, and enforcing compliance by threatening civilians on both sides of the Venezuelan-Colombian border and subjecting those who do not obey to punishments ranging from fines to forced labour and even killings.

According to the organization, there is evidence that armed groups on both sides of the border exercise control through threats, kidnappings, forced labour, child recruitment, and murder and that in Arauca, armed groups have also planted landmines and perpetrated sexual violence, among other abuses. Additionally, they reported that these groups take advantage of the economic situation and the failure of the education system to engage in recruiting Colombian and Venezuelan children. There are also reports of members of the group committing sexual violence against girls, including rape and forced abortion.

In March 2021, the organizations working in the Venezuelan border with Colombia reported constant clashes between Venezuela’s armed forces and irregular armed groups in the state of Apure. Nearly 5,000 refugees had to flee to Colombia because of this situation.

The United Nations Office for the Coordination of Humanitarian Affairs (OCHA) reported that since March 21, clashes between the Bolivarian National Armed Forces (FANB) and irregular armed groups have generated the displacement of more than 5,000 people to Arauquita (Colombia). Due to this situation, humanitarian actors in the area of La Victoria had to suspend their work. There were also claims of various human rights violation in the context of these armed clashes.

The hostilities and armed clashes between the different armed groups in Venezuelan territory, including their clashes with Venezuelan state forces, could meet the necessary requirements to be considered as a medium-intensity conflict. Furthermore, they may have a spill-over effect in the region which represents a risk to international peace and security. These issues should be discussed and examined by the international community and specifically by the Security Council and other UN bodies.

This is an open event to all Missions of Member States of the UN, international organizations and the larger UN Community, in which we aim to:

The session will be moderated by Ms. Karina Gerlach – Senior Advisor at the Center on International Cooperation (NYU) – as follows: