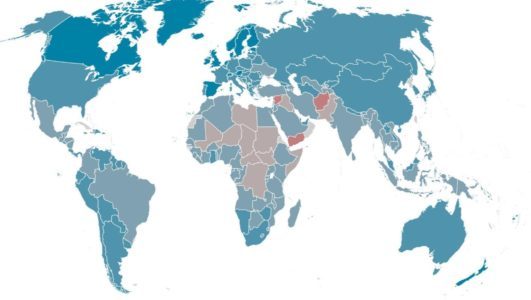 The best and worst countries to be a woman

An exclusive first look at the upcoming Women, Peace, and Security Index shows how these countries might surprise you—and why it’s strategic to care.

A version of this story is part of our November 2019 special issue of National Geographic magazine, “Women: A Century of Change.” Read more stories here.

No country has it all when it comes to gender equality, but some places are better than others to be a woman. The Women, Peace and Security Index seeks to understand these global differences by measuring women’s inclusion in society, sense of security, and exposure to discrimination—key indicators of how women are faring. The latest data show that some of the worst countries for women have achieved gains, even as some of the best are lagging in crucial areas. (Read the feature story here.)

National Geographic partnered with the Georgetown Institute for Women, Peace and Security to illustrate the 2019 index.

Three main categories—inclusion, security, and justice—are broken down into 11 subcategories to assess women’s empowerment around the world.

Women’s level of participation in economic, social, and political opportunities

Women age 25 and older who are engaged in paid work

Average years of education among women 25 and older

Sense of safety and exposure to violence

Physically harmed or sexually assaulted in past year by a partner

Experience of formal and informal discrimination

When she fled her home in Pakistan last summer, half asleep in her pajamas, Gulalai Ismail wasn’t thinking about the power of data.

She was on the run and escaped to New York, where she’s seeking asylum from what she describes as “death threats, rape threats, acid attack threats, mob-violence threats” stemming from her activism back home with women in Pakistan’s tribal areas.

One of the women weighs heavily on her mind. “She had a small piece of paper with 25 straight lines on it,” Ismail recalls, etched to mark each time security forces came to her home and sexually harassed her. “She said she was an uneducated woman,” but despite her illiteracy, she was creating a record of her abuse.

The ability to track information, to collect it, to have data readily available—whether scribbled on scrap paper or mined from global databases—has power. Power to embarrass, to highlight success, to spark media coverage, and to pinpoint where change is needed.

To join in the effort to build evidence, National Geographic teamed up with the Georgetown Institute for Women, Peace and Security and the Peace Research Institute Oslo to illustrate their upcoming 2019-2020 Women, Peace, and Security Index. The index serves as a kind of report card on women’s well-being, ranking 167 countries from best to worst in three key areas: women’s inclusion in society, sense of security, and access to justice.

Those three areas are broken down into specific categories, such as whether a woman has access to cell phone, feels safe walking home at night, or is surrounded by men who find it unacceptable for her to hold a paying job. Every country has something of a mixed record. The United States as a country ranks #19 overall. The subcategory of government representation—the percentage of legislative seats held by women—helped to lower its score. Mexico’s overall country score ranks #103, but it happens to do well when it comes to women holding political seats.

“This exercise of rating and ranking can be really powerful because countries, like human beings, think in relative terms and compare themselves with others,” says Judith Kelley, author of Scorecard Diplomacy and Dean of the Sanford School of Public Policy at Duke University. “They care about their status and standing, and it can be a really powerful motivator.” She cautions, however, that the measurements—such as gender equality— have to be meaningful to countries and that the data needs to identify actionable solutions.

The index creators see security as one way to show how meaningful women’s rights should be to leaders. Women in countries steeped in conflict face increased risk, but they argue that mounting evidence indicates the flip side may also be true: Countries that don’t protect women are more at risk themselves.

“We know from the preponderance of the data that there is a correlation in societies where this kind of pervasive, gender-based violence can lead to greater instability, can lead to eventual conflict,” says Melanne Verveer, Executive Director of the Georgetown Institute and the former first U.S. ambassador for Global Women’s Issues, nominated in 2009 by President Barack Obama. The denial of women’s rights and the oppression of women, she says, usually follows “a linear track” to instability.

Verveer says the index is coming out on the cusp of 2020, which will mark 25 years since the United Nation’s Fourth World Conference on Women in Beijing. The conference set forth multiple targets to improve the lives of women around the world. «We’re going to be looking at how much progress we’ve made in those 25 years, and there’s been progress, no doubt. Also considerable gaps.»

And the simple existence of rankings has power. When meeting with leaders to discuss the index, says Verveer, “the first thing that happens with representatives of governments is they look at the ranking” to see where they stack up.

According to the graphic, a country represented by boxes colored red are doing worse. Those doing better in certain categories appear blue. Each of those boxes, for a government official or a local organizer, can be a call to action, and for someone on the ground, can be public acknowledgement of individual experience. For example, when Ismail first started as an activist as a teen in Pakistan, she and her sister Saba created a group (one that would expand and eventually train Malala Yousafzai) to address the lack of public spaces for girls. She says the boys could play cricket outside, but the girls could only walk by while on the way to school or shopping. “Later we realized as we grew up that it was not just public parks and public spaces which are not accessible,” she says. “It’s actually every place where power belongs.”

Turning to the index with Ismail to look at Pakistan’s section on discriminatory norms, she says, even before looking, “It should be red!” And it is. The country ranks 164 out of 167 countries included in the index.

No matter where a country ranks on the list, there are surprises. “A pattern of unevenness categorizes pretty much all countries,” says Jeni Klugman, managing director of the Georgetown Institute and lead author of the index. “For example, Afghanistan does relatively well in terms of [women’s] political participation.” And Yemen, the lowest on the list, has relatively low levels of intimate partner violence and even son bias, the prenatal sex determination and abortions that can result in more boys than girls born in a country.

“Son bias is basically sex-linked abortion,” says Klugman. “But you need assisted technology to know the sex.” Ironically, in countries like China and India, “as the middle class grew, it [son bias] actually got worse rather than better—people could actually do the ultrasound, find out what the sex was, and have the abortion” if the baby was a girl.

Ranking squarely in the middle of the list is Venezuela. It falls at #84. Norway ranks #1, outstripping Iceland after elections led to the losses of several seats held by women. Had Venezuela only been measured on the dimensions of inclusion and justice, it would jump into the 40s, says Klugman, near Singapore. What pushes it lower on the list is the category of community safety–whether females aged 15 and over report feeling safe while walking home at night.

“When young people want to get together, they go to someone’s house and everyone sleeps over. If you leave after dark, your life is at risk,” says Beatriz Borges, a women’s and human rights activist from Venezuela. “You can be robbed, attacked, or raped with complete impunity,” she says.

The sleepovers are a sort of “cultural prevention” Borges says, to avoid violence. Perhaps the index will help turn those individual and “cultural” efforts into official ones, and those experiences into memories.