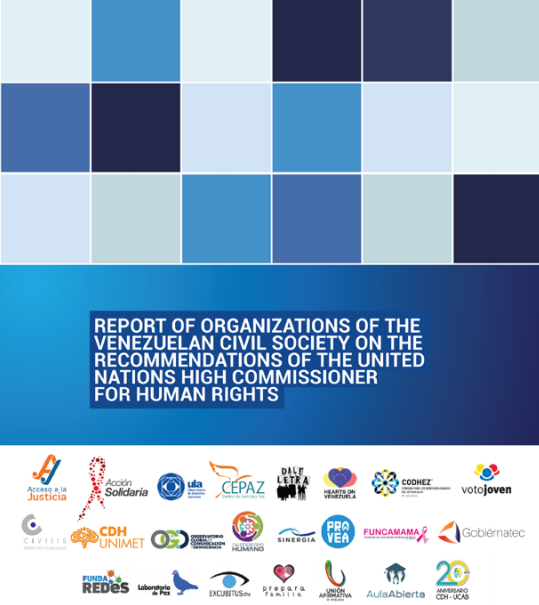 Since 2016, various international organizations have expressed their concern about the continuous and severe deterioration of the human rights situation in Venezuela, which is showed in the deep undermining of the rule of law and the disintegration of democratic institutions, as well as in a Complex Humanitarian Emergency on a national scale and multidimensional character, with severe impacts on the massive deprivation of minimum adequate standards of living for the majority of the population. A defining characteristic of this situation is the political crisis that, for many years, has caused the lack of independent and impartial public powers, affecting in particular the Judicial, Legislative and Electoral Powers.

On October 3rd, 2018, the United Nations Human Rights Council adopted resolution A / HRC / RES / 39/1 in which it “requested the High Commissioner to prepare a comprehensive written report on the human rights situation in the Bolivarian Republic of Venezuela …. and to present it orally to the Council, during their periods of 40th and 42nd sessions, updated information on the human rights situation”. On July 4th, 2019, Michelle Bachelet, in her capacity as High Commissioner of the United Nations for Human Rights (OHCHR) issued Report A / HRC / 41/18 where it presented twenty-three recommendations to the Venezuelan State regarding to violations in the following areas: a) Arbitrary Detentions, b) Torture and Executions, c) ESC Rights, d) Women, e) Persecution, f) Indigenous People, g) Justice, h) Deprivation of liberty, i) CSOs – Defenders, j) Freedom of Speech.

Later, on September 14th and 20th, 2020, OHCHR presented two oral updates on the situation of human rights in the country, and on September 17th, 2020, a second report was made public, on the independence of the justice system and access to justice, including violations of economic and social rights, and the human rights situation in the region of the Orinoco Mining Arc. This report was followed by a third one on allegations of human rights violations of the rights to life, liberty and physical integrity. In the first quarter of 2021, OHCHR carried out a third oral follow-up update, mentioning new elements on human rights violations and reaffirming the violations and reaffirming the violations that continue to occur.

The OHCHR’s investigation work reiterated what Venezuelan civil society and various international organizations have been documenting and exposing: an unprecedented multidimensional crisis characterized as a complex humanitarian emergency because it is the consequence of a large-scale, multidimensional and comprehensive violations of human rights on a large scale in Venezuela1 as a result of the absence of the rule of law, the massive deprivation of economic and social rights, and the dismantling of democratic institutions.

In this regard, the purpose of this report is to evaluate compliance with the recommendations requested by OHCHR in its reports to the Venezuelan State to improve the human rights situation, based on the data and experiences that the OHCHR has gathered  and verified by the field work and documentation provided by other international organizations and civil society organizations.